Best Hotel Management Colleges in India Say no to Ragging

#Ragging is a form of #abuse on #newcomers to educational #institutions. Some senior students force the unorganized newcomers to undergo 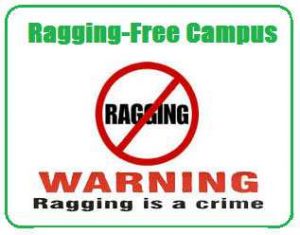 several forms of mental, physical and sexual abuses and includes.
(a) #Teasing or abusing, playing practical #jokes or causing hurt to any student.
(b) Asking any student to do any act, or perform anything, which he/she would not, in the ordinary course, be willing to do.
#‎HotelManagement‬ #‎Students #‎AICTE #‎Crime ‪#‎HotelIndustry‬
The juniors are usually too frightened to resist their organized group of tormentors. In recent times this practice has turned ugly. Every year number of cases of severe physical ragging as well as sexual abuses during the ragging. This has a great adverse psychological impact on the personality of the students and the scars of such incidents take a very long time to heal.

Any conduct, by spoken or written words or by an act which has the effect of harassing, teasing, treating or handling with rudeness any other student, indulging in rowdy or undisciplined activities which causes or is likely to cause annoyance, hardship or psychological harm or to raise fear or apprehension in a fresher or a junior student;asking the students to do any act or perform something which such student will not in the ordinary course and which has the effect of causing or generating a sense of shame or embarrassment so as to adversely affect the physique or psyche of a fresher or a Junior student.

Measures for prohibition of ragging : – 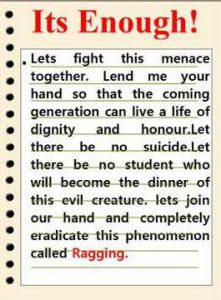 BNG Bengal Nalanda Group shall strictly observe, the provisions of the Act of the Central Government and the State Governments, If any, or if enacted and/ or for the time being in force, considering ragging as a cognizable offence under the law at par with rape and other atrocities, against women and ill-treatment of persons belonging to the SC/ST and prohibiting ragging in all its forms in all institutions.
Ragging in all its forms shall be totally banned in the entire BNG Kolkata including its departments, constituent units, all its premises (academic, residential ,sports, canteen, etc) whether located within the campus or outside and in all means of transportation of students whether public or private.
BNG Kolkata shall take strict action against those found guilty of ragging and/ or of abetting ragging.
Every institution shall have an Anti-Ragging Committee and an Anti -Ragging Squad All matters of discipline within teaching institutions must be resolved within the campus except those impinging on law and order or breach of peace or public tranquility, all of which should be dealt with under the penal laws of the land
BNG Kolkata shall arrange for regular and periodic psychological counseling and orientation for students (for freshers separately, as well as jointly with seniors) by professional counselors during the first three months of the new academic year. This shall be done at the institution and department/ course levels. Parents and teachers shall also be involved in such sessions.

Depending upon the nature and gravity of the offence as established by the Anti-Ragging Committee of the institution, the possible punishments for those found guilty of ragging at BNG Kolkata shall be anyone or any combination of the following: